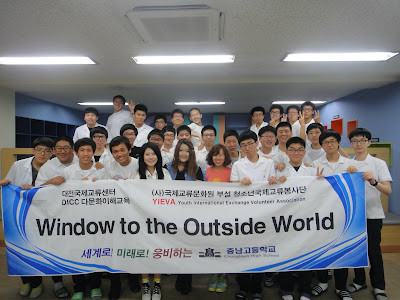 Last month, I got a call from Daejeon InternationalCommunity Center[1] in Daejeon, South Korea to voluntarily share about my country's culture to Chungnam high school's students.  I was very surprised and excited to give a presentation in front of people whom I had never known before.  Also, it would be my first time to give 45-minute long presentation.  As i was afraid to go there alone, I asked three of my friends to go along with me.

When I arrived to the school, I felt that the school was even bigger than my university. (>.<)" A teacher of the class that we would present to welcomed us warmly and brought us around school and met other teachers. After that, the teacher brought us to her classroom.


There were around 30 students in the classroom and they seemed to be very smart.  The class began with one presentation from one of students.  I was very impressive how he presented very well and I was nervous the same time because I got stage fright.

Then it was my turn to give a presentation.  I prepared many video clips for my presentation, so I felt a bit ok that I did not need to speak all 45 minutes long.  My presentation, of course, was about Thailand and what the effect of K-pop in Thailand was.  I was very surprised of information that I found out.  According to Koreantimes newspaper, Thai tourists in Korea spent average $US1,392 per person in 2010, which was higher than Japanese tourists spent average $US 1,070.

In the last session of my presentation, I showed them about Thai movie trailer which was spot in Korea.  They really loved it.  I hope you also like it...^^

PS: [1] Daejeon International Community Center(DICC) is a non-government organization in Daejeon city.  Its aim is to help foreigners who live in Daejeon city.  They provided many facilities and services such as Korean language courses, Korean culture trips, and Korean Food courses.  I went there to join Korean class.  The fee was really cheap comparing to other institute.  It costs 5,000 won for normal course and 10,000 won for TOPIK preparation course.  Also, the teachers of each course are very good at teaching Korean.  DICC invited teachers and professors from Korean language institutes and good universities around Daejeon city.